Recurrent epidemics of visceral leishmaniasis in East Africa (Ethiopia, Kenya, South Sudan and Sudan) have caused high morbidity and mortality in affected communities. Likewise, major epidemics of cutaneous leishmaniasis have affected different parts Afghanistan and the Syrian Arab Republic. In 2014, more than 90% of new cases reported to WHO occurred in six countries: Brazil, Ethiopia, India, Somalia, South Sudan and Sudan. In the WHO South-East Asia Region, the kala-azar elimination programme is progressing satisfactorily, and countries such as Bangladesh that reported more than 9000 cases in 2006 reported an average of some 600 news cases in 2014–2015. The majority of cutaneous Leishmaniasis cases occur in Afghanistan, Algeria, Brazil, Colombia, the Islamic Republic of Iran, Pakistan, Peru, Saudi Arabia and the Syrian Arab Republic. 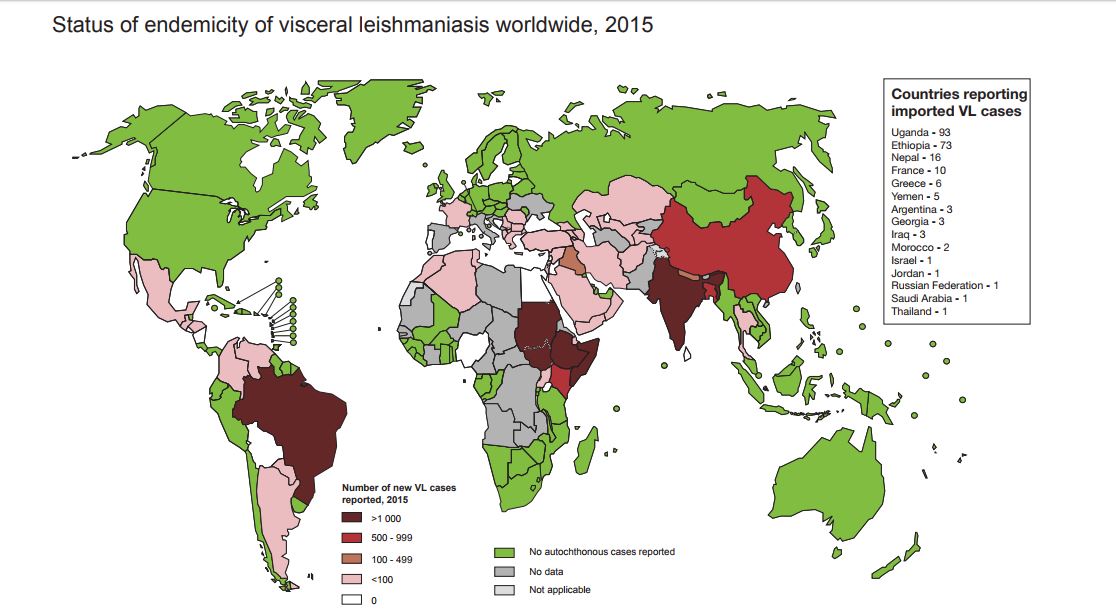 Anthroponotic cutaneous leishmaniasis (where humans are the major reservoir of the parasite) is predominantly urban and periurban, and shows patterns of spatial clustering similar to those of anthroponotic visceral leishmaniasis in South-East Asia. The disease is usually characterized by large outbreaks in densely populated cities, especially in war and conflicts zones, refugee camps and in settings where there are large-scale migration of populations. The epidemiology of cutaneous leishmaniasis in the Region of the Americas is complex, with intra- and inter-specific variation in transmission cycles, reservoir hosts, sandfly vectors, clinical manifestations and response to therapy, and multiple circulating Leishmania species in the same geographical area. Almost 90% of mucocutaneous leishmaniasis cases occurs in the Plurinational State of Bolivia, Brazil and Peru.