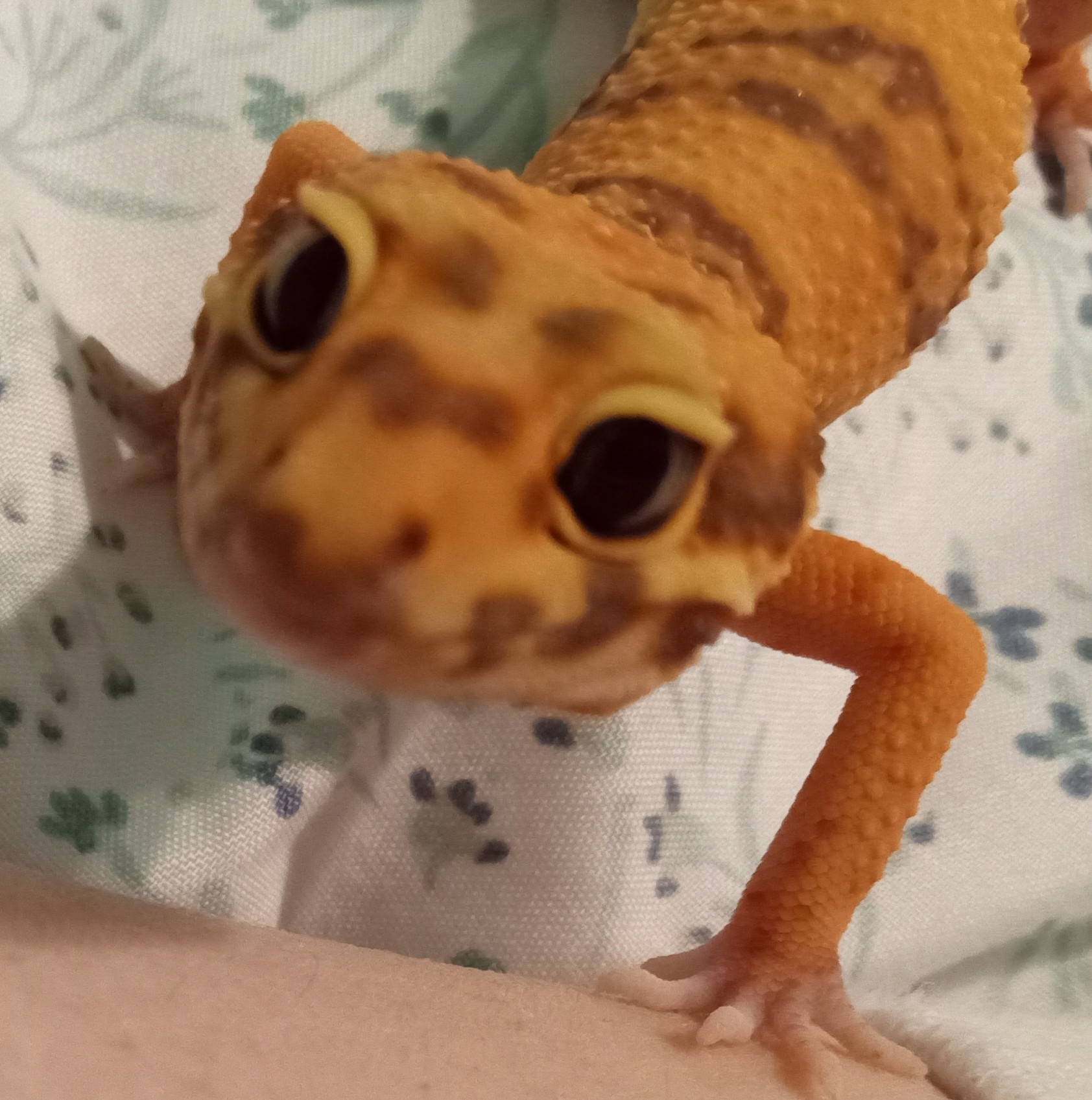 Leopard geckos are a very popular pet and companion in the reptile hobby. They are widely known as one of the best starter geckos, their care easy and diet even easier. There are many reputable stores to buy these lizards from, whether in person or online. Because of their popularity, there are many interesting morphs of these animals, some of them pricing up to $1000 due to the rarity of the breed. They are a desert lizard, living in the highlands and rocky outcrops of Asia. These geckos are of course in the order Squamata, but they are assigned to the family Eublepharidae. Unlike the majority of geckos, they have movable eyelids, and they can not climb up smooth surfaces due to their lack of toe pads. Obviously they should never be collected in their environment but should only be purchased from legal farms.

THE DIET OF E. MACULARIUS
Leopard geckos are insectivores, their diet needing a healthy balance of proteins and calcium. Their food necessities are easy to find, as well as easy to breed. You can buy and find these bugs
at any pet store. Mealworms are a staple of their diet, a very easy insect to find, care for, and breed.
They can live in a substrate of oatmeals and cereal bits added in with some cricket food or any type of fruits for some hydration. They are the larvae of darkling beetles, which is a type of beetle that these geckos can also eat, as long as the insects are at most the size of their head. There are many alternate worms that leopard gecko owners feed their pets, including calci worms. They have high levels of calcium, being a great add on to your pets diet every once in a while. Leopard geckos with a lack of calcium can end up having a bone disease called MBD, which is why feeding calci worms or dusting their food with calcium powder is very important.

Another type of worm that is used to increase their fat levels is called the waxworm. These are a very controversial feeding choice, due to the fat levels in these worms. The reason why they are such a big debate is because leopard geckos can actually get addicted to these worms, refusing to eat anything else and becoming unhealthy in the process.
Crickets are the most popular thing to feed your leopard gecko by far, due to their cheap prices, ease of care, lifespan, activity, and different sizes. The disadvantage about these insects is their smell, however. You should not leave these bugs uneaten in the tank, as they can and will bite and attack your lizard. Another alternative you can feed them, which is actually known to be nutritionally better, is dubia roaches. They are small, and have no smell, and you can buy them at any pet stores or chains. 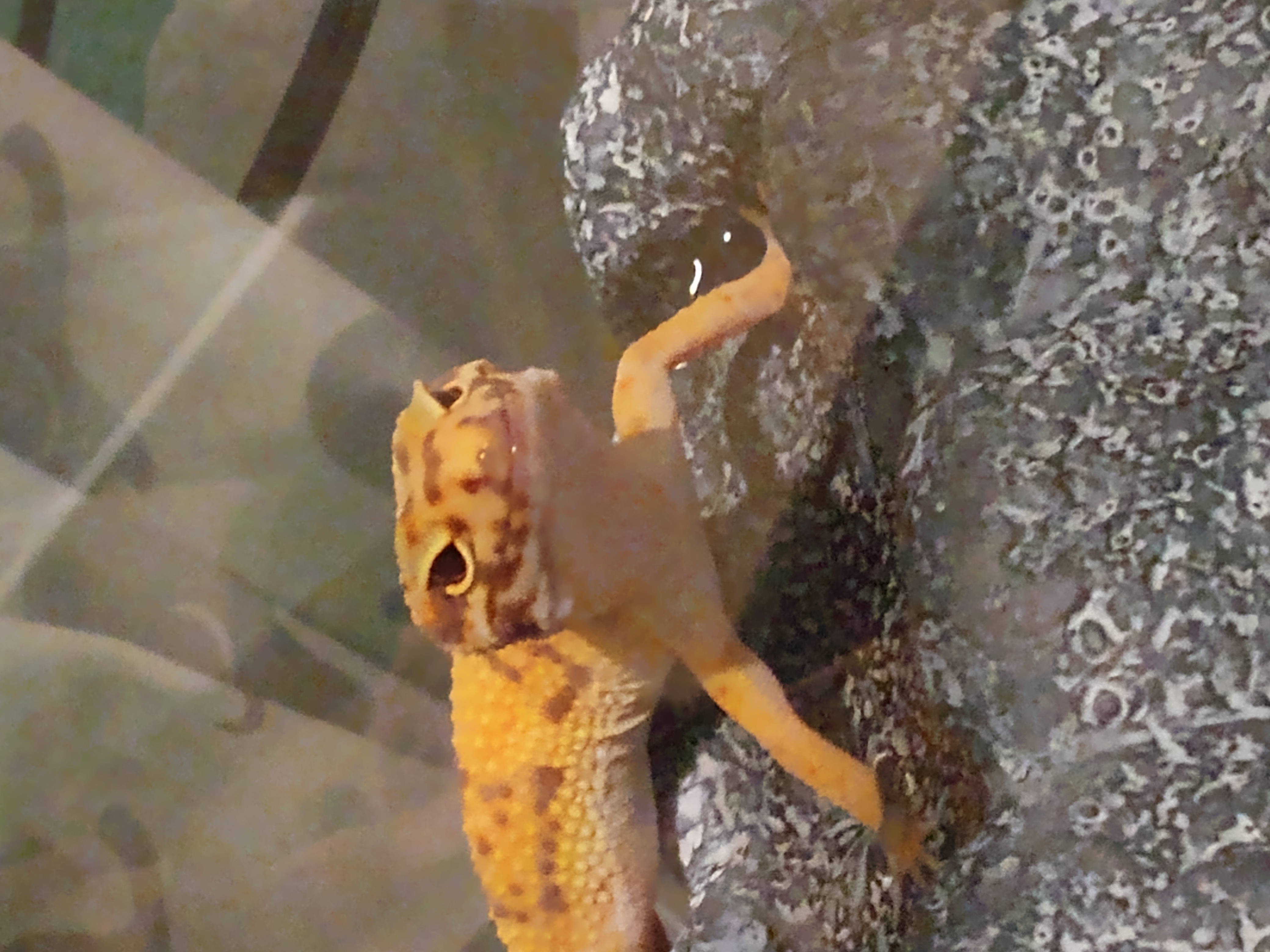 The size of the tank depends on the leopard gecko, whether you’re keeping multiple, planning to breed in the future, or making a temporary home. What is normally suggested for an adult leopard gecko is a 20 gallon tank, but going larger is always better.
A. If you decide to keep multiple, never keep two males together, or one male and one female. Keep two females together in a 30-40 gallon tank so that they both have room to live and thrive. Remember that they can turn on each other at any time, and this is not recommended.
B. If you are going the route of breeding, you will want two separate tanks. The male is separated from the female while they are not breeding, as the male can stress out the female by too many attempts at mating.
C. Lastly, if you are making a temporary home for a leopard gecko, go the route of buying a 10 gallon. Leopard geckos can live in a 10 gallon tank, and they are inexpensive and easy to acquire and set up.

A leopard gecko must be able to regulate its body temperature and have a cool side as well as a hot side. It is recommended to use under-tank heating pads for this species, as they are not one to bask under the sunlight. Their daytime spot should be 88 degrees Fahrenheit, or 31 degrees Celsius, while the gradient should go down to 75 Fahrenheit, or 24 Celsius. At night, the temperature can drop to 70-75 degrees Fahrenheit or 24 degrees Celsius.

Leopard geckos are crepuscular, so they do not need a large amount of UVB lighting, or any at all, but is it generally recommended to have a small bit of it since they are active at dawn and sunset hours. They need lighting to have a day-night cycle, preferably 12 hours of day and 12 hours of night, but it can change depending on the season you are currently in.

BREEDING
The leopard gecko is recommended as a beginner breeding project, as the long breeding season and no special requirements are needed.
You will need a male, and one or two females (two females if you would like to raise the probability of hatching babies). The male will enter the female's enclosure, or vice versa, and they will take the breeding from there. Their breeding season is January through September.
Once your female(s) become gravid, it’s time to separate them so as to not add more stress. Carrying babies takes a lot out of a female, and you have to make sure they’re healthy and eating well.
When a female becomes gravid, they will lay their eggs approximately 21 to 28 days after mating. They should lay two eggs per clutch, and the amount of eggs you get will depend on how many times you breed them.
The eggs will hatch in 35 to 89 days, the latter being more common. The eggs will need constant incubation, a substrate like vermiculite for humidity and temperature keeping. You can buy an incubator, or make one homemade. Temperatures are known to affect sex of hatchlings, intermidiate temperatures producing males while cooler and higher can produce females.

BEHAVIOR AND TEMPERAMENT
They are nocturnal geckos who are very calm and easy to handle in captivity. They do not bite, but they can drop their tails and use them to communicate. They are slow moving, and known to be vocal. They will chirp when they’re happy, and even scream when they feel annoyed and threatened. Leo's tail-wave as well, which is a slow, back and forth motion that they will do when they feel threatened, or about to attack. These geckos also rattle their tail, but unlike a rattlesnake, rattling it when they are happy or excited to mate. Taming them is very easy, and handling them a little every day should get your pets used to your company.

HUMIDITY
Since leopard geckos are desert lizards, they do not need as high humidity levels as other squamates do. The humidity level should be 30-40 percent to help them shed well and be hydrated. You should keep a humid hide, which can be made or purchased from in person stores or online shopping. If their humidity levels are below 20, it can cause many problems for them.

SUBSTRATE
Even though pet chains will recommend sand substrate, it is highly known not to use this. Instead, you can use paper towels, reptile carpet, or a jungle mix (not wood shavings). Paper towels and reptile carpet are the most widely used since there is no chance of the reptile ingesting it. Tile is another option, although it is harder to deal with and clean. Wood shavings, as I mentioned earlier, should not be used for leos as it can irritate their feet and body.